Top 5 Birds To Spot In Your Garden

Hello ladies and gentlemen, welcome to this article and thank you for joining me. We’re talking about wildlife in this article and the kinds you’re likely to find near home. More specifically, the Top 5 Birds To Spot In Your Garden. A perfect activity for gaining more enjoyment from your own outdoor space.

I’ve been a nature photographer for around fifteen years and much of my earlier wildlife photography was in my garden at home. In recent years my love for wildlife and nature has taken me to many corners of the UK, and many different landscapes.

In the first of my mini series of Guest Blogs with Welsh Slate Water Features, let’s take this journey back to where it begins for most of us, our own gardens.

The little bird with the big song. 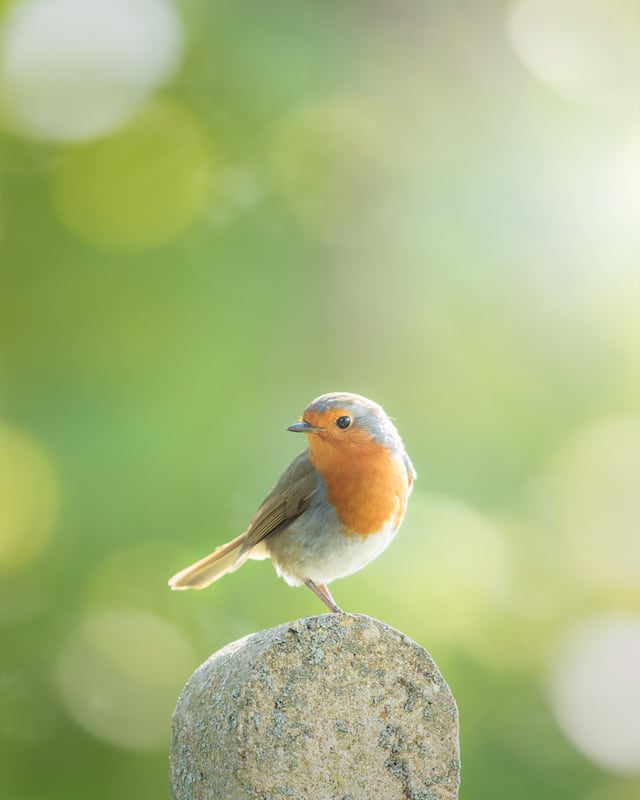 While this is possibly the most common visitor to nearly every garden in the UK it’s by no means a boring bird. With it’s bright orange, red breast it’s very easily identifiable. You’ll generally find them hanging around the fringes of the garden, occupying higher vantage points and surveying. If you have fences, standing stones or overhanging tall bushes or trees, these are perfect perches for the Robin. They like to use these perches to look for easy things to eat on the floor of your garden.

Another identifying factor of the Robin is it’s song. For a bird that’s usually 12-14cm from beak to tail and weighs as much as only 20g, it has a huge song! Once you’ve heard this song you won’t be able to mistake it. As a rule they’re one of the first birds to start singing with the dawn chorus, and one of the last to stop singing in the evening. In fact, you can hear them singing year round except for a short period of time in late summer when they moult. Robins sing with the seasons and the autumn song begins just after the moult. This continues on into winter when the spring song takes over, sometimes as early as mid-December.

Top Tip: keep your ears on your garden for a long multi-toned song. Follow that song and you’ll likely see a little brown bird with a red breast and creamy grey belly singing it’s heart out.

The songbird that runs in numbers. 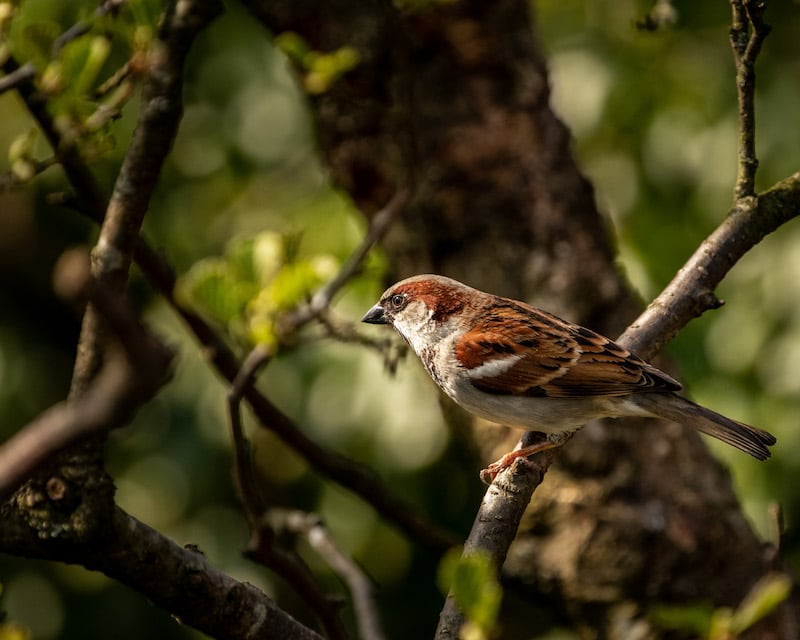 These fantastic little birds are almost as common as the Robin in many of our gardens, despite currently being under the UK Conservation Status list as Red. With that being said, they seem to be making a strong comeback due to the efforts of home and garden owners. The House Sparrow is a bird you’ll normally see moving around in groups of between three and six, but bigger groups aren’t unheard of.

Typically, House Sparrows occupy the canopy of surrounding trees, bushes and hedges. These are a small songbird of opportunity. They’ll hang around in the hedges and trees until there’s an opportune time for them to drop down in your garden and start searching for their next meals. Their diet consists mostly of seeds so grasses and flower seeds can be a target. Being opportunistic, if they can grind it up with their beaks they’ll eat it.

They are identifiable from other members of the Old World Sparrow family by a few markings of the plumage. The males have light grey, almost white, cheeks with a red, brown half circle flowing around the back of the head and neck. The females are an alternating colouration between a light reddish brown and a darker brown, almost black running through finished with a horizontal creamy white fleck across the eye.

Top Tip: Their song is a short repetition of alternating higher and lower pitch chirps.

​The songbird of many colours. 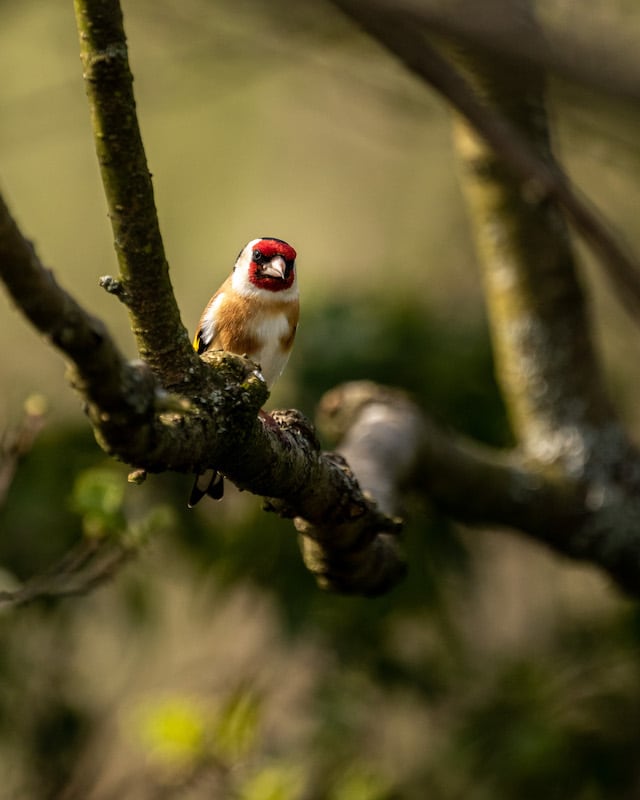 This is a songbird you won’t have to hear to know it’s there. It’s one of the most colourful of the more common songbirds you can expect to see. The Goldfinch has increased in number in recent years to where they’re now quite a regular garden visitor. They will often be seen in pairs, but sometimes in groups of up to four or five birds. They aren’t an overly skittish bird either. They will be quite content to sit on the fringes of trees, bushes and hedges as well as rock features, fences, walls, feeders and bird baths. Goldfinch don’t rush to get away once they’re perched unless they’re startled. The beauty of this is if you see one, or usually two, in your garden there’s a good chance you’ll have time to keep watching.

Possibly the most easily identifiable songbird in the United Kingdom due to their uniqueness. Both males and females look alike. They’ve a brown upper back with a white chest and belly, a black head with white cheeks and a completely red face. Their wings are mostly black with white flecks and a yellow downward sweep from the shoulder.

Top Tip: Being somewhere around 12cm from beak to tail, weighing between 14-18g, they’re a very small bird. Even if you hadn’t seen a picture, from that description alone you must be able to envisage a very colourful little creature.

Sporting a crown of blue. 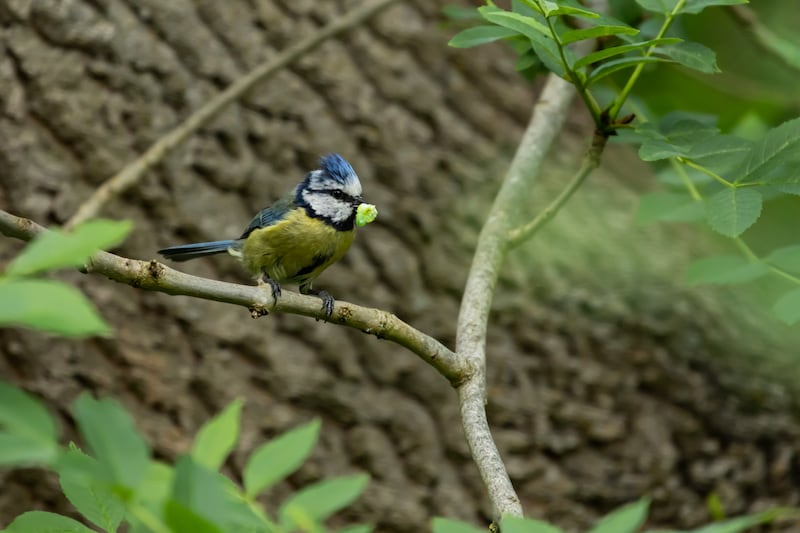 The Blue Tit is one of those birds you can’t help but enjoy seeing. Little flashes of yellow and blue darting about the garden. They are active throughout the entire day and are most commonly seen in pairs but it’s not uncommon to see them in family groups of up to five or six. They are a bird that doesn’t keep still very long.

They’re normally heard more than they are seen, they tend to hide among inner branches of trees and hedges. They will venture out long enough to collect something to eat though, being frequent visitors to feeders. Their diet in the wild consists of mostly of spiders, caterpillars, insects and invertebrates. That’s not to say they wouldn’t be more than happy to visit feeders of seeds and fat balls if you have them in your garden. Something to note, if you can see a group of Blue Tits, it’s most likely that there will be three or four times that number that you can’t see.

They aren’t a difficult bird to identify with their yellow chest and belly, white cheeks, dark blue wings that look almost black and their beautiful blue crown. But they can be easily confused with the Great Tit, which we will come to shortly. Blue Tits are very similarly sized to the Robin being around the 12cm length and 18g in weight, but they do have a slightly shorter beak.

Top Tip: Their song is quite unique with a lower tone followed by three of four higher pitched tones. Once you’ve heard it you will easily identify it. A welcome garden visitor with nice bright colours and a song to lift the spirits.

​The largest of Tits, which isn’t saying much. 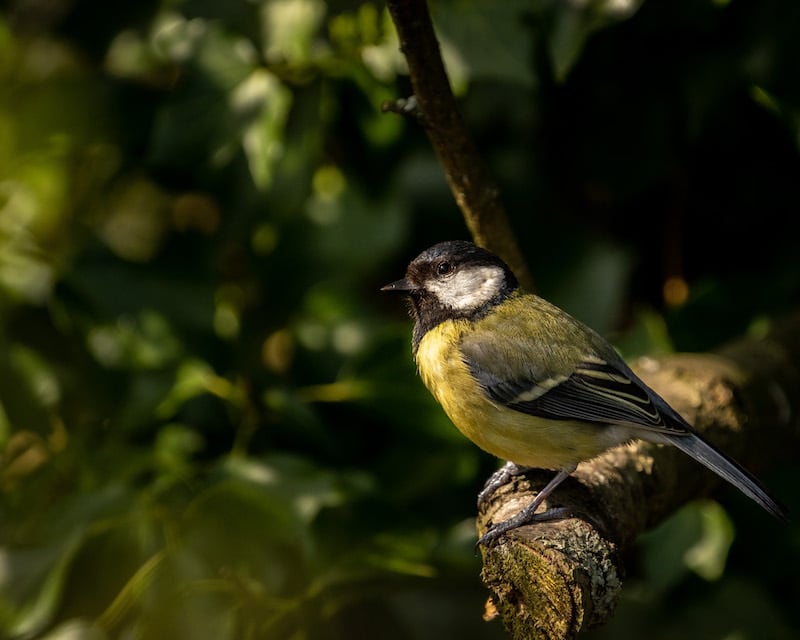 This beautiful bird is similar to the Blue Tit in its colouration, but not quite the same. There is subtle difference. My joke about them being not much bigger than other song birds is almost factual. They are in fact a touch larger, not by much I’ll grant you, but when you’re only 14cm long, every millimetre counts! Their behaviour is much the same as the Blue Tit, normally seen in small family groups. The same as the Blue Tit in that for every one that you do see there are probably two or three more that you can’t see. Due to their size they appear to have the mentality of “being the boss” and will push smaller birds off of food sources. They aren’t particularly fussy eaters, usually preferring insects, spiders and caterpillars but they will eat seeds, nuts and buds when available.

Great Tits are not difficult to spot, but can be easily mixed up with the Blue Tit. They carry the same yellow chest and belly, and white cheeks. But that’s where the similarities end. Their wings have a more green colour to them rather than the blue of the Blue Tit. Their head is black, that black extends down the back and around to the front of the neck. While they beat out the Blue Tit and most other songbirds by a whopping 2cm to make them 14cm in length, they keep more or less the same weight of around 18g. The difference in size being only 2cm doesn’t always directly translate itself to the visible size difference.

Top Tip: Their song is very distinguishable. A high pitched note followed by a lower pitched note in succession, usually four or five times. They’re loud too, if there is one chirping in your garden, you’ll know it quickly. The larger boys and girls of the songbird world, but a welcome visitor to our gardens.

I hope this article has provided readers with some useful insights into the Top 5 Birds To Spot In Your Garden and you’ve enjoyed my photographs. Remember, it’s all about patience and persistence; if you give the wildlife in your garden your time, you’ll be rewarded with a great show.

Take care everyone, and please look out soon for my next guest post for Welsh Slate Water Features!

We’re privileged and proud to post the Top 5 Birds To Spot In Your Garden, a truly unique guest blog by UK wildlife photographer Gareth Kelley.

Please follow Gareth via his website and social media to see more of his incredible wildlife photos!