As an introduction to our Historic Sites blog series, Sarah Day at Prehistoric Experiences has provided us with this wonderful insight into her interests in natural stone and the history of its usage.

We tend to think of stone as permanent, unchanging, something that stands still and bears witness to our comings and goings but isn’t really a ‘part’ of our lives. Of course that’s not really true, but for our ancestors it was even less true. Caves were a safe haven during Ice Age winters as well as a sacred canvas for the worlds earliest art, it provided tools and weapons… in fact, to our ancestors stones were central to everyday life.

Pottery was only invented in the Neolithic, the last gasp of the stone age. How did people cook soups, stews, medicines before that? Using rocks! Certain rocks are what I refer to as fire safe. Igneous rocks (those born in fire) are the ones which usually fit the purpose. River smoothed cobbles of Granite, Quartzite, Basalt and others can be heated to extreme temperatures in a fire then dropped into a hide bucket (or even a basket) of water or soup. It is incredibly quick and quite impressive to watch- the water boils instantly, hissing and sputtering like a geyser. Using a rock is one of my favourite ways to cook meat and fish- simply find a larger slab of fire safe rock ( or lay a bed of cobbles) heat them up and lay the food directly on the rock. You couldn’t wish for a better frying pan. A warning though, using the wrong rock can result in a terrifying ( and dangerous) explosion!

Of course most people think of stone tools when they think of the stone age. Of Flint and Chert, knapped into shapes, at first crude and heavy but evolving into works of art over millennia. However, those two aren’t the only stones that have been appreciated for their sharp edges. There have been some stunning finds in Spain of knapped rock crystal- clear as glass. You can imagine the hold those objects might have had over folk living in a land ruled by ice. The banded volcanic greenstone of the Langdales was traded far and wide, swapped with the glossy ‘black gold’ of Grimes Graves, Norfolk. In the Americas Obsidian, Jasper, and a dizzying variety of striped, spotted, marbled colourful knappable rocks have changed stone tool making from a craft to a collectable art form. Where a there was no local flint or chert, other rocks would be found or traded, others pressed into use, sometimes with beautiful results. I recently had need to make a slate knife as a prop for a video. Such knives were made and used in Scandinavian countries in the Mesolithic. Unable to find a big enough piece at my local garden centre, I raided a dumped pile of hardcore, and found a fragment of slate paving slab. Its beautiful stuff, the bevel of the blade revealing undulating layers of what would once have been a muddy seabed.

Then there’s Stonehenge. I have to say I was somewhat disappointed when I visited on a bright summer day, weaving through crowds of tourists, a forest of selfie sticks, I admit I didn’t really ‘get it’. Fast forwards a few years and I was privileged to work at StoneHenge with Timecapsule Education for a week. We sheepishly asked if it might be possible for us to visit the stones early in the morning, before the masses arrive in busloads. The answer was a brisk“ of course, you can come up with us when we do ‘stonecheck’ “.

Walking in amongst the stones, mist hiding the road, even the fence from view, I can happily say, I finally ‘got it’. Staring up at their looming height from a distance of a few inches, peering at the antique graffiti it was impossible not to be impressed. My lasting impression was of solemnity, but also of human effort, of leadership, of generations of visionary leaders who managed to marshal hundreds of willing locals (or enslaved enemies) to create this cathedral of stones. If you ever visit, pay a bit extra, and go on a private early morning tour.

Stones played a very important part in my own story as well. As a child I was completely obsessed with fossils. I found my first sea urchin aged 5, and in the subsequent years spent many happy hours picking through our gravel driveway. I have yet to find an original flint tool, but have been learning to knap my own since the age of 7 or 8. It was because of this that I was sent on a day course with Will Lord when I was 13, I later worked for him visiting schools, and now run the company, visiting schools, knapping a hand axe for each class, handing out stone tools for them to use. The influence of natural stone runs through my life in one form or another, who knows where it will lead

Huge thanks to Sarah Day for providing this wonderful guest blog post. 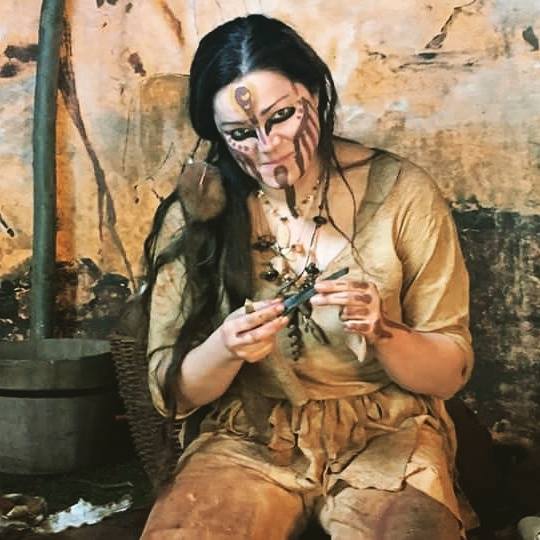 We’re always to looking to collaborate with guest bloggers and cross promote each other via social media.

Learn More about our Guest Blogging…